“Her nightmares were like bloodstains. They were impossible to get rid of.” ~Zenith: The Androma Saga 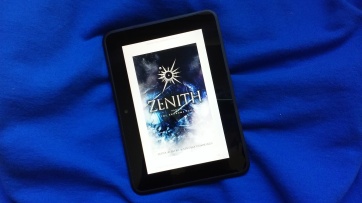 Most know her as the Bloody Baroness, the captain of fearsome glass starship called The Marauder. Androma and her crew strike terror im the hearts of those who cross them amongst the many corners if the Mirabel Galaxy.

When a routine mission goes rogue, the all-female crew is captured by a bounty hunter from Andi’s past and forced into a job that could, quite literally, start a war that will devour worlds.

Meanwhile, on the far side of the galaxy, the ruthless ruler Nor waits in the shadows of the planet Xen Ptera, biding her time. The final pieces are about to fall into place, liberating a plan that will tear Mirabel in two.

As the Marauder hurtles toward the unknown, there is one lesson that proves to be true: No one can be trusted in a galaxy that runs on lies and illusion.

*This review may contain some possible spoilers*

I gave this book five stars, I really loved how this book was written! The characters are very kick-butt strong characters. Sasha and Lindsay describe the scenes and characters very well, it’s amazing imagery that paints the perfect picture in mind and really helps me get a feel for the book itself. I absolutely love their writing style it helped me get through it very quickly! I just couldn’t put it down.

Characters like Nor are introduced and she comes off as a horrible and evil character, but you can’t help but love how much of a badass she is. Same with Andi she’s been through so much that you can’t help but want to hear her story and it gives you an amazing connection with Andi and her crew! They use sentences like ” Death was Andi’s closest friend, a little demon that whispered in her ear on dark nights.” If you don’t fall in love with that type of writing than I don’t know what to say. Haha in all seriousness though I really like how they describe things and just how beautifully the sentences flow together.

I really love the character Nor, I love how she’s a strong female character that doesn’t mind getting blood on her hands. In Zenith: The Androma Saga it says, ” Nor had always loved the sound of her own voice, powerful yet pure all at once. A voice that brought even the strongest, bravest men to their knees. A voice that could make heads roll, should anyone speak against her.” Seriously how can you not love how stong of a character she is! I know she’s kinda evil and all, but that is such an amazing description of her voice! It just shows how powerful she is and it gives the reader an idea of what to expect in the book and what type of person she is.

Also, can we talk about Andi’s past?!? You get a look into Andi’s past and why she has become a criminal when she is captured by Governor Cyprian. She killed the governor’s daughter and now she has to go rescue his son! It’s so crazy that I wasn’t expecting that at all! I thought when she got caught she was going to be sent to the jail and maybe that’s when she would meet Valen, the governor’s son, not that she was on a rescue mission. It really leaves you wanting more as you wonder how she’s going to rescue him, how Kaley the governor’s daughter died, and how Andi is supposed to pull this all off on planet Xen Ptera.

I definitely recommend anyone and everyone go and pick up the start to this book on and e-reader! It’s such an amazing read and I love it a lot so I am very excited for more parts to be released so I can keep on reading this awesome book

I decided to buy some watercolors today🤗 been a while since I've made anything but I like how this turned out
Here's some progress. Im not sure if I like the colors used for the letter but I also don't know if I care enough to change it🤷‍♀️
Started a new cross stitch today! I feel like I've been working on it for a long time already🤣
Here's an update on my progress with this cross stich! Its slowly coming along haha
Slowly making some more progress on this one! Probably gonna put it away for today tho
Making some progress on this one😊