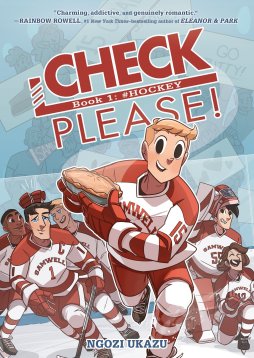 Y’all… I might not be ready for this. I may be a former junior figure skating champion, vlogger extraordinaire, and very talented amateur pâtissier, but being a freshman on the Samwell University hockey team is a whole new challenge. It’s nothing like co-ed club hockey back in Georgia! First of all? There’s checking. And then, there is Jack—our very attractive but moody captain.

A collection of the first half of the megapopular webcomic series of the same name, Check, Please!: #Hockey is the first book of a hilarious and stirring two-volume coming-of-age story about hockey, bros, and trying to find yourself during the best four years of your life.

I’m doing this review because I want to and I haven’t done a review in forever! Plus, I have some issues with this book and I feel like talking about them. Disclaimer: if you really like this book and don’t want to hear anything wrong with it then you don’t need to read my review…unless you’re chill.

So, I’m just gonna jump right in and start with the least important thing that bothers me about this book haha. So at one point Bitty, the main character, does a figure skater jump because he used to be a figure skater. However, he’s in his hockey gear when he does it. The gear itself is bulky, but the reason it bothers me so much is because hockey skates and figure skates are completely different. There’s a reason figure skates have what’s called a toe pick…it’s meant for jumps. He wouldn’t have been able to do it on hockey skates. Now you may be thinking, “Abigail it’s a fictional book…”, I understand that, but the author went through a lot of trouble researching the sport and it is supposed to be a contemporary type novel. I just feel like if you’re going to go through that much work by researching the sport you should at least stick with the facts. Like I said it’s not an important issue, but maybe it just bothers me because I’m a hockey fan.

A bigger problem I had, was the stereotyping which I think a lot of people ignored, but if the odds were flipped around people would freak out about. This might make some people mad but I honestly don’t know because I don’t know if anyone is even going to read this haha. Anyway, Bitty is gay which is obvious but he’s from Georgia. I don’t like the author stereotyping the South so negatively…I just think some of the things said weren’t necessary. I don’t wanna get too deep into it.

I also think the way that Bitty ‘comes out’ is unnecessary. I mean it’s kind of obvious that he’s gay and I think there didn’t need to be a ‘coming out scene’. I’m not saying there’s anything wrong with him being gay because obviously there’s not. I just thought it would have been better if the author already made it kind of know or just let it be more…natural? I don’t know what word is the best to use, but I basically mean that the author shouldn’t have made him ‘come out’ and that he should have already been open about it. It’s not like it actually mattered if he was interested in guys because like I said the boys would have already been able to tell. I’m not trying to step on any toes by the way.

The author also said she did a lot of research into hockey and it kind of bothers me that she hinted at hockey players not being accepting. Like “Oh no they might not like having a gay player on the team” and I understand not everyone is accepting, and hockey players may be really tough and all but they’re really accepting and open people. Same thing with a lot of southerners. I don’t know maybe I’m the only one who thinks these things haha.

Anyway, I did really like the artwork and I plan on reading her other graphic novels. I think the story was cute and the romance was cute. I can’t help but fall in love with the characters they’re so funny and silly and I love that they act like a family, because that’s what kinda happens when you’re on a team.

I know this review was mostly negative, but I still liked this book. I just wanted to get some of my thoughts out there. I really liked reading a hockey graphic novel because I don’t see a lot of hockey books. So, I really enjoyed reading this one. I wish there was more hockey involved like the games were more detailed, but oh well. Maybe the other books are better. 🙂 Tell me what y’all think about this book!

Oh by the way I definitely recommend this book!! It’s a fun read. 🙂

One thought on “Check Please!”