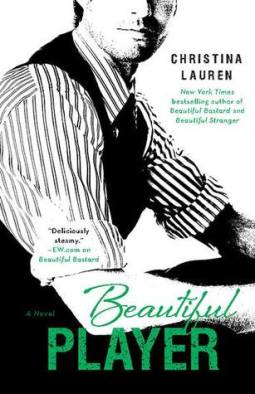 A bombshell bookworm. A chronic Casanova. And a lesson in chemistry too scandalous for school.

When Hanna Bergstrom receives a lecture from her overprotective brother about neglecting her social life and burying herself in grad school, she’s determined to tackle his implied assignment: get out, make friends, start dating. And who better to turn her into the sultry siren every man wants than her brother’s gorgeous best friend, Will Sumner, venture capitalist and unapologetic playboy?

Will takes risks for a living, but he’s skeptical about this challenge of Hanna’s…until the wild night his innocently seductive pupil tempts him into bed- and teaches him a thing or two about being with a woman he can’t forget. Now that Hanna’s discovered the power of her own sex appeal, it’s up to Will to prove he’s the only man she’ll ever need.

So, this is book three in the Beautiful Bastard series. You can read these books as stand alones, but it’s better to read them in order since the other characters do make appearances. So far they’re all good so I don’t see why someone wouldn’t read them in order but to each their own.

At first I wasn’t sure if I liked this book as much as I liked the others. I might have to change my rating on Beautiful Stranger because I think that one is my favorite. Anyway, I really liked this story and how it ended. I liked the past characters contributions to the story as well because some stuff happened and it made me really happy haha. I won’t spoil anything though.

Will and Hannah. Hannah is a beautiful nerdy girl who isn’t afraid to say whatever comes to her mind. That’s something I love most about her. I love how straightforward and open she is without and fear. I love how she’s super smart and so nerdy when it comes to her work! It makes her even more adorable. Will is a player and has been for years. He’s your typical bad boy kind of guy covered in tattoos and loves women, but he’s also very smart too. That’s how they come together because they’re both intelligent but where will has a lot of experience in women Hannah has no experience in men and wants Will to help her out. I thought that made for an interesting story and I do like how things worked out for them

The steamy parts were super good like always and I love how Christina Lauren writes them so that it’s not super repetitive. I mean it can be slightly repetitive, but from book to book they’re pretty different because each couple likes different things. The author is a very skilled writer and I really do love her romance novels.

I don’t know why I don’t get five star feelings from her books though. I mean her books are all really good and I’ve loved all the books I’ve read of her’s so far, but I just haven’t gotten five star feelings. I’ve never felt like giving her books anything under three stars, but nothing over four stars either. Which isn’t a bad thing at all…I’ll definitely keep reading her books and I consider her a new favorite author.

Anyway, I liked this book a lot. I didn’t really like the conflict they had though. I mean all the books have a similar plot where they start out with great sex then, want more from each other, then have a conflict, then resolve the conflict, then they’re all happy again haha. It’s kinda like Nicholas Sparks where it’s familiar and comfortable but also really good. 🙂 This conflict was a little weird though because I felt like it was slightly unnecessary because it was a communication error…they had been doing very good at communicating the whole time and then all of a sudden forgot how to communicate haha. It all worked out in the end but still.

I’m definitely excited to see what happens next in the series. I definitely want to read more of Christina Lauren’s newer books as well. 🙂 I really love her writing style and I think she does a good job with the characters and their romances. 🙂 I’m excited to continue watching the characters grow and see their relationships unfold and evolve.

I know this is a short-ish review but I hope y’all enjoyed it. 🙂

One thought on “Beautiful Player”