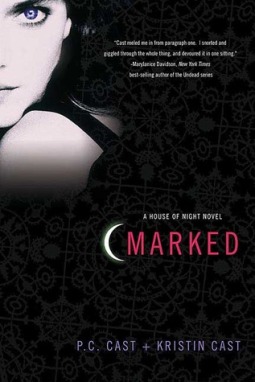 After a Vampire Tracker Marks her with a crescent moon on her forehead, 16-year-old Zoey Redbird enters the House of Night and learns that she is no average fledgling. She has been Marked as special by the vampyre Goddess Nyx and has affinities for all five elements: Air, Fire Water, Earth and Spirit. But she is not the only fledgling at the House of Night with special powers. When she discovers that the leader of the Dark Daughters, the school’s most elite club, is mis-using her Goddess-given gifts, Zoey must look deep within herself for the courage to embrace her destiny – with a little help from her new vampyre friends (or Nerd Herd, as Aphrodite calls them)

I asked on my twitter if there was such thing as a good vampire novel and someone recommended this series. I bought the first one and figured I would give it a try.

I’m kind of excited for it because I’ve been pretty much craving a good vampire book. I’m not sure why it just sorta happened haha. I’m hoping this book will satisfy my vampire needs though. I’m not in the mood for just any supernatural/fantasy book I specifically want a book with vampires. However, I feel like most vampire books/movies/TV shows don’t work because people make it this really horrible cliché. I want a book that’s epic but also super interesting. I don’t want a book where you pretty much know the whole plot from the first page.

This book actually sounds promising to me. I think from the synopsis it has an interesting plot…not unheard of but still different to most vampire books. I also think that it’ll kind of feel like a supernatural/contemporary type feel since the main character is younger. Maybe that means romance won’t be super big in it. I’m probably wrong though haha. Only one way to find out!

Hope y’all enjoyed this post! Once again sorry it’s not Wednesday but you gotta do what ya gotta do! If you know of any good vampire novels please do comment down below!! I would really appreciate it! ❤